For the first time in its sixty-year history, Champion Equipment Company (CEC) descended onto Las Vegas amidst a crowd of 130,000 construction professionals and manufacturers to be a first-time exhibitor at ConExpo, the largest construction industry trade show in the world. As with all trade shows, CEC set out to increase awareness and generate sales, but the primary goal was to engage with drilling experts to learn about their projects, hear their challenges first hand, and determine how CEC can be of service. For over sixty years, CEC has been working with drilling contractors to custom-build tooling for virtually every type of ground condition imaginable. CEC knew that a show like ConExpo would surface multiple stories of project challenges and that attendees could benefit from the company’s unmatched expertise. 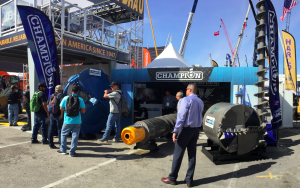 Over the course of the five-day show, CEC team members Evan Maltz, Executive Vice President; and Ian Maltz, Engineer Operations/Sales, had an opportunity to speak with over 200 organizations from five continents. The booth design allowed the team to sit down with clients and discuss their current and upcoming challenges. Each day, two CEC engineers listened to customers and offered solutions to their foundation drilling challenges. The response was phenomenal.

“We received amazing feedback about the quality of our tools and reputation for being the best in the industry. Many of the companies that visited our booth said they had never seen tools built the way we build them,” said EVP Evan Maltz.

As part of the show exhibit, CEC displayed several innovative and in-demand drilling tools. Without having any benchmark on what could be sold, CEC was pleasantly surprised to sell the majority of the featured tools, which are now being shipped throughout the United States and even as far as Australia. 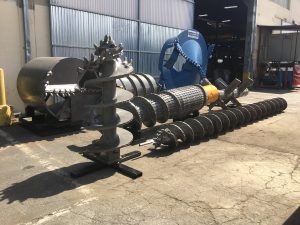 “As a first time exhibitor at such a large event, we really didn’t know what to expect and thought we could get lost in the sea of cranes, iron, and displays,” added Maltz. “When you have been in the business for as long as we have, you always hope that your products and services can withstand the test of time and increased competition. When we heard comments like ‘Champion is the place to call when you are in a bind and need help resolving issues no one else knows how to fix,’ that was incredibly gratifying.”